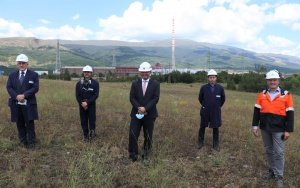 The solar plant will be built on the site of Aurubis Bulgaria’s Pirdop copper smelter, located 80 kilometres east of the capital Sofia, and will be the biggest solar installation for energy self-consumption in the country, CEZ Bulgaria said in a statement without providing any details on the price of the deal.

The PV plant will spread on 10.4 ha and will include 20,200 solar panels. The plant is expected to become operational within 18 months.

With the solar plant, Aurubis Bulgaria will optimise external energy consumption by some 11,700 MWh per year, as the installation is expected to generate about 170,000 MWh within a 15-year period. The plant will cover an average of 2.5% of the electricity consumed by the Aurubis Bulgaria smelter.

“This project is part of the long-term investment programme of the company and is in line with our policy for sustainable development and transition to green economy,” Tim Kurt, CEO of Aurubis Bulgaria, said in the statement.

Aurubis Bulgaria aims to produce 20% of the electricity needed for the operation of its copper smelter from own renewable energy sources by 2030, Kurt added.

Last year, the official told SeeNews that the 132 million euro ($155.1 million) investment programme, which the company launched in 2018, is running according to plan, as its aim is to improve efficiency, cut costs and facilitate maintenance. The four-year investment programme will secure the company’s long-term operations, Kurt said back then.